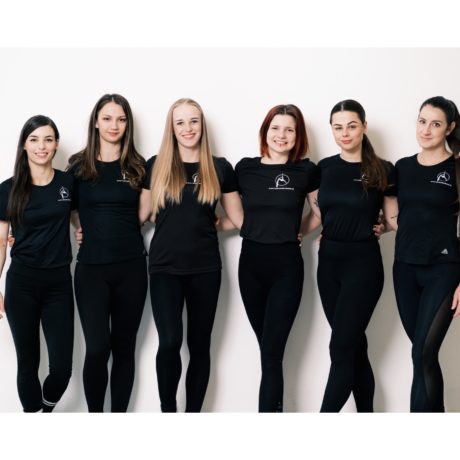 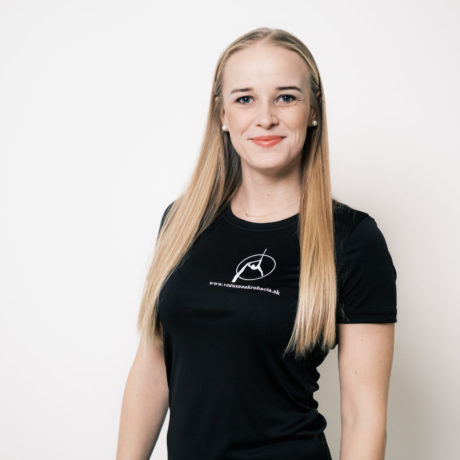 Monika started as a modern gymnast and did it for 15 years. She started acrobatics in 2010. Monika’s style of learning is through teaching. Based on her many years of professional experience, she will teach you how to properly engage your muscles, proper warm-up and preparatory strengthening elements that will help you in the air. Subsequently, it precisely demonstrates specific elements in the air, which you will gradually combine into a choreography. To top it up, to avoid incorrect technical design as well as possible risks in case of incorrect demonstration. 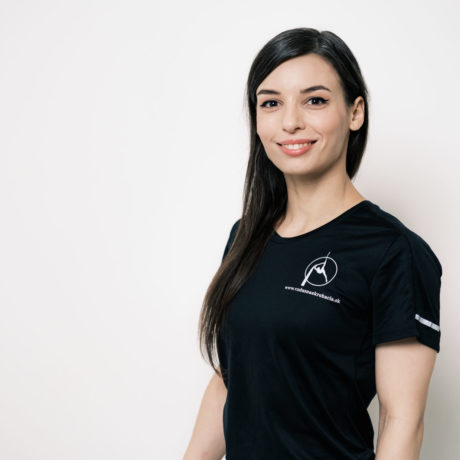 Katka has more than 10 years of rich artistic experiences, when she started playing the piano at the age of 5, she sang and then played the flute. She first encountered acrobatics in 2015, when she started in the pole dance . Subsequently, began to practice lessons of aerial silk. Katka has completed several foreign camps, where she had the opportunity to train and learn from up to 27 coaches from around the world from Hong Kong, Russia, Ukraine, Lithuania, etc. At the same time, she is constantly training at various official international seminars and webinars in the field of proper muscle involvement, proper exercise techniques and physio. 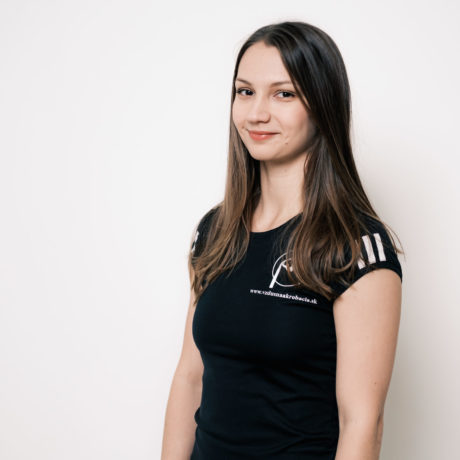 Kika has been intensively involved in modern gymnastics and show dance since she was 4 years old. She has been practicing gymnastics for 12 years and has remained dancing to this day. She represented Slovakia at several world cups, where she won medals. Her path to aerial acrobatics began with pole dance, which she did during her visit to the University of England. After returning to Slovakia, she was looking for something new that would be both challenging and creative for her. One day she visited an hour of aerial hoop and is still fully dedicated to it to this day. The sports base she built from an early age and her rich experience in gymnastics and dance gave her excellent conditions for aerial acrobatics on the ring. 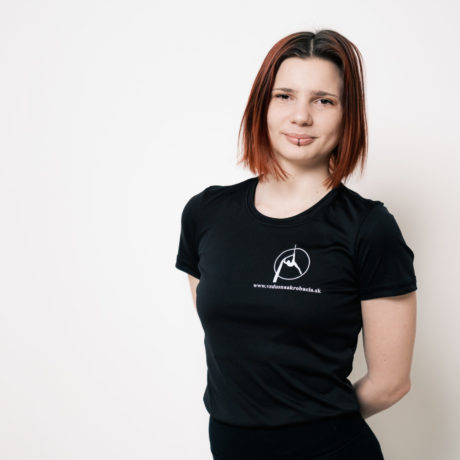 Nelka has been involved in various sports since preschool. From competitive swimming to karate to gymnastics. Later, however, she was fascinated by dance and took part in various performances and recordings. She was brought to aerial acrobatics in 2019 by her co-performers, and at that time she found a sport that combined all her passions into one. At first she started with aerial silks, but it didn’t take long for her to fall in love with the aerial hoop too. 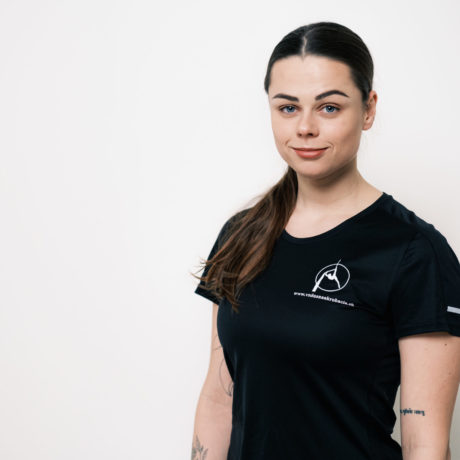 Hanka started as an swimmer and rowing at an early age. However, when she first saw acrobatics as a girl at one of the world’s circus shows, she was so fascinated by it that she decided to change her sports focus and started doing acrobatics. In 2014, Hanka started with pole dance classes for the first time and then with aerial acrobatics. She started with aerial silk and trapeze in the USA in Oregon, where she learned this beautiful sport and art all year round. For the last few years, Hanka has been intensively engaged in aerial hoop and silk, fly yoga, trapeze and pole dance. Hanka completed several foreign courses, where she had the opportunity to learn from the best acrobats in the world. 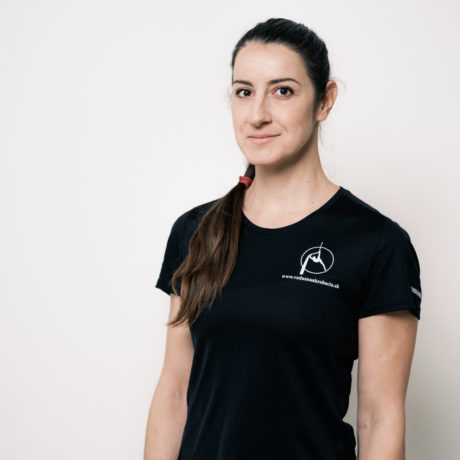 Barbora has been playing tennis for many years and has participated in several tournaments. In 2017, she completed her first course in aerial acrobatics on the ring and subsequently she also devoted herself to wheel, pole dance, chair dance, but she definitely returned to the ring. During the competition years in tennis, she learned hard work, gained an excellent sports foundation and self-discipline. As a result, she began to practice aerial hoop intensively. From an early age, she had a relationship with art and sports. She fell in love with aerial acrobatics because for her it represents a perfect combination of both of her passions into one. 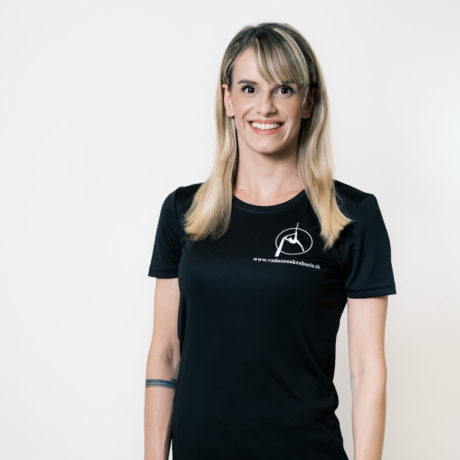 Sasha is a former representative in modern gymnastics, which she started to do in 1998, till 2014. During these years, she became the champion of Slovakia several times and participated in several European and World championships as a representative of the Slovak Republic. In 2015, she discovered aerial acrobatics for the first time. She was so captivated by aerial acrobatics that after an active career as a gymnast, she began to train it professionally. Subsequently, she became an aerial acrobatics trainer in Austria and participated in several shows and performances throughout Europe. At the top of her career, she has graduated at Faculty of Physical Education and Sport in Bratislava, majoring in fitness coaching. As a coach with a Master’s degree, she has a lot of experience working with children. For several years now, she has been successfully leading gymnastics and aerial acrobatics trainings for the little ones, where she applies university theory as well as practice, which she acquired during her professional career as a gymnast and acrobat. 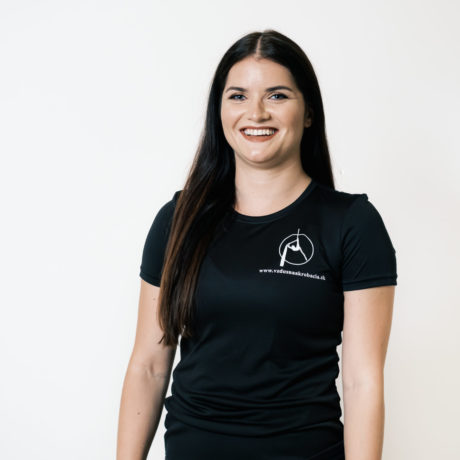 Martina has been training modern gymnastics from pre-school age, to which she is faithful for ten years. During these years, she became the multiple champion of Slovakia. In addition to gymnastics, she also participated in various types of dance, such as jazz, latin american dances and contemporary dance in many international competitions. Later, she also tried a relatively unknown sport in Slovakia – aesthetic gymnastics, which is practiced without equipment and contains many dance elements and movements. Subsequently, she began to be interested into yoga, to strengthen her body and mind. After finishing college, she decided to try a new challenge in the form of aerial acrobatics on a hoop, and this sport enchanted her so much that she decided to practice it every second of her free time. Due to the fact that it combines muscle strengthening, improving flexibility in combination with elegance of movement, she considers it as an ideal sports activity, which is also very attractive to the audience. Thanks to her experience in gymnastics, you will experience a precise warm-up with Martina, which will perfectly prepare you for a lesson of aerial acrobatics. 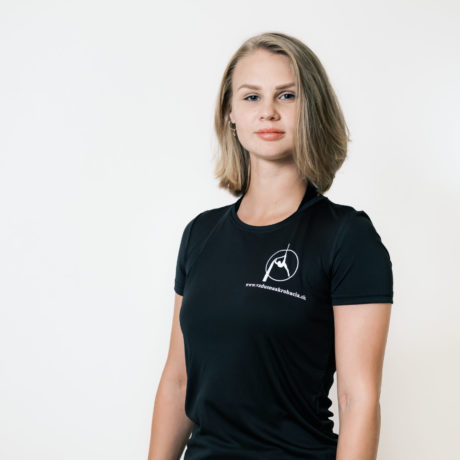 Michaela has been dancing professionally since she was seven years old. She represented Slovakia at several World Cups and international competitions, where she has been on medal positions. Thanks to competitions and daily trainings, she has got a lot of experience in the field of sports from an early age. In 2016, she became the champion of Slovakia and the vice-champion at the World championships in the category disco dance group and street dance show group. She has graduated sports gymnasium, thanks to which she received a coaching license II. degree. Later, she discovered aerial acrobatics, which captivated her so much that she has been doing it until now. Thanks to many years of sports practice in the field of dance and academic theory, which she acquired through her studies, she will teach you how to combine the sports and artistic aspects of aerial acrobatics into one. 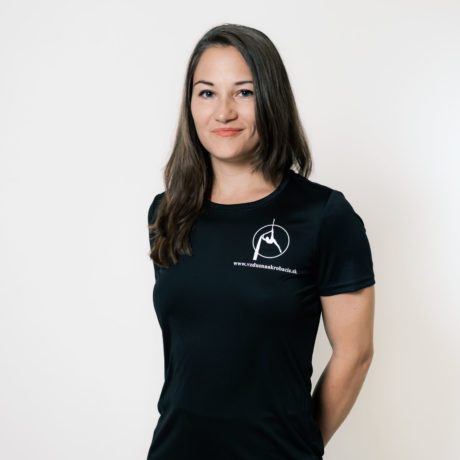 Barbara’s approach to movement was shaped by workshops, residencies and evening schools of contemporary and aerial dance, as well as non-dance disciplines of various winter and summer adrenaline sports. She started with aerial acrobatics in 2016, first on silks and later on aerial hoop. She has participated in several acrobatic performances and movement installations in Slovakia and throughout Europe. She likes to approach the teaching of aerial acrobatics with creative techniques. Aerial acrobatics is reminding her dancing in the air. She is presenting new grip techniques to her students and loves interesting elements and unique combinations.

This website uses cookies to improve your experience while you navigate through the website. Out of these cookies, the cookies that are categorized as necessary are stored on your browser as they are essential for the working of basic functionalities of the website. We also use third-party cookies that help us analyze and understand how you use this website. These cookies will be stored in your browser only with your consent. You also have the option to opt-out of these cookies. But opting out of some of these cookies may have an effect on your browsing experience.
Necessary Always Enabled
Necessary cookies are absolutely essential for the website to function properly. This category only includes cookies that ensures basic functionalities and security features of the website. These cookies do not store any personal information.
Non-necessary
Any cookies that may not be particularly necessary for the website to function and is used specifically to collect user personal data via analytics, ads, other embedded contents are termed as non-necessary cookies. It is mandatory to procure user consent prior to running these cookies on your website.
SAVE & ACCEPT